ARCHIVES
of writings by Jan R. Markle
from transitionwestmarin.wordpress.com,
2009-2012

…a small selection of items written by Jan R. Markle and published in the blog “transitionwestmarin.wordpress.com” between 2009 and 2012.

The posts or pages of these selected archives of transitionwestmarin.wordpress.com were compiled or written by Jan R. Markle, except for guest posts, and reflected her views of the themes and issues going on in West Marin, CA during that time. 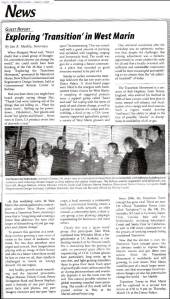 “Transition West Marin is the 28th official Transition Initiative in the US, the 171st official Transition Initiative in the world. Not actually a town, ‘West Marin’ is an unincorporated, mainly rural area of western Marin County, California. Home to about 10,000 people, it encompasses 14 small villages, and stretches 40 miles from Muir Beach in the South, through the San Geronimo Valley and Point Reyes Station, to Tomales in the North.

Previously ‘West Marin Localization Network,’ TWM evolved in response to presentations of Richard Heinberg and Jerry Mander in 2007. Penny Livingston-Stark, the permaculturist on the TWM team, holds the distinction of having given a presentation to Transition Town Totnes in May, 2007, at the invitation of Rob Hopkins. The very same week that Penny was speaking in England about what had been happening with West Marin’s local food economy, community connections and awareness of local resources, West Marin Alliance was showing a video of Rob Hopkins explaining the Transition Town concept to the West Marin community.

In partnership with other local groups such as Regenerative Design Institute, Mainstreet Moms, West Marin Commons and Environmental Action Committee of Marin, TWM has set up working group meetings at the Presbyterian Church in Point Reyes Station every two weeks throughout the coming summer. The first two meetings have been great successes. Amid good food, tea and stimulating ideas, several projects have begun moving ahead.

These proposals include a transition support group for local businesses, West Marin Resource Guide and Sustainable West Marin Apprenticeship Program. A community garden group is assessing a new plot of land, a gleaning project for the food bank has begun and a food shed mapping project and a food co-op have volunteers and are progressing forward. A local ‘Spend it in West Marin’ currency awareness campaign already has $2000 worth of ‘hearts and flowers’ money committed to local spending.

Perhaps the highlight of the latest meeting was the bustle of the on-site re-skilling workshop. As part of the drive to get rid of plastic bags in Marin County, the Mainstreet Moms and the Make It In West Marin group joined forces and, with tools of sewing machines, fabric paint, locally-donated organic cotton and enthusiasm, sewed, painted, glued and braided their way towards eliminating plastic bags by offering beautiful alternatives.  In one night they sewed innumerable new cotton bags, painted colorful ‘BYO bag’ pins and, in the process, taught 3 people, 2 adults and 1 child, how to use the sewing machine. They plan to supply the local markets with these bags to raise awareness about alternatives to plastic.”
~Thank you to Jan Markle for providing this update about Transition West Marin projects! -TransitionUS 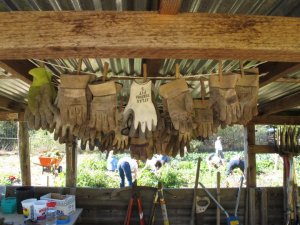 After many meetings, and after creating working groups in 2009 and 2010 to make West Marin self-sufficient, members of the group that called itself  “Transition West Marin” stopped coming to meetings and went off and became involved in the community with their projects.